Ronaldo Mulitalo has become an ambassador for Stepping Stone House

Up and coming Cronulla Sharks star Ronaldo Mulitalo has become an ambassador for Sydney’s Stepping Stone House, aiding them in striving for their goal of ending youth homelessness in Australia. His own childhood background of poverty and struggle gives Ronaldo a unique position from which to draw on and connect with young homeless people, as a mentor and an example of overcoming adversity.

Stepping Stone House provides long term accommodation and personal development programmes to young homeless people from around Australia. Like many of those currently using the Stepping Stone House services, Ronaldo grew up in a household where providing even the basics in life was tough for his family. Six years of his childhood saw his family living in a double garage in South Auckland, where their possessions would sometimes be stolen from beside them while they slept. Such experiences have given Ronaldo a personal connection with the challenges faced by the young people that Stepping Stone House supports.

Ronaldo’s mother has always been his guiding light and the leader of the family. Her strong work ethic made a huge impression as he was growing up, and as a Stepping Stone House ambassador he wants to impart that same drive and hope that she gave him. She initially encouraged his promising soccer skills (hence the name Ronaldo); but one day he saw his cousin playing rugby league and was hooked. For his first season of league he had to borrow a pair of boots from a neighbour, however, this clearly didn’t hold him back, and Ronaldo was recruited into the Cronulla Sharks development squad at the age of 16.

A lot of focus, resilience and hard training has seen Ronaldo overcome two shoulder reconstructions to achieve a breakout first grade season for the Sharks in 2019, and he has since been getting some big reps from some of the best players in the NRL. Playing and training alongside his childhood heroes has been a dream come true for Ronaldo, as well as further instilling in him a great attitude toward his career and his life. His priorities are to set up his family financially and be a good role model during his rugby league journey, and he has already begun by travelling to Papua New Guinea to work with disadvantaged kids. Becoming an ambassador for Stepping Stone House was an ideal way for him to use his position as a role model to connect directly with disadvantaged young people in Australia, helping them to aim high in life and show that hard beginnings can be overcome.

Sleep Under the Stars 2018 – a massive success!

On Friday the 26th of October, we held our largest fundraising event of the year, Sleep Under the Stars.

This years event was on a scale not previously experienced by our team and we are happy to say the whole event was a huge success, with over 500 people registered, and $455,000 raised.

Some highlights from the night:

Stepping Stone House might be a small charity in Sydney, but we have have been working tirelessly to champion our cause and support homeless and at-risk youth – and it has paid off!

Our efforts were recently recognised by the Association of Children’s Welfare Agencies (ACWA) when we were awarded the Service Excellence Award at the 2018 Achievement Awards. We couldn’t be happier with the result or prouder of our exceptional team and everything they do.

Stepping Stone House started with the goal of providing safety and security to young people in need, most of whom hail from
disadvantaged backgrounds and turbulent families full of exposure to drugs, alcohol and violence. Since embarking on this mission
nearly 30 years ago, Stepping Stone House has helped over 450 young people experiencing or at risk of homelessness.

The award was presented by The Honorable Pru Goward, the Minister for Family and Community Services, on behalf of the ACWA.
The ACWA noted that SSH has “demonstrated outstanding work in assisting homeless and disadvantaged youth to achieve responsible
independence. They also included the results of an independent survey of former SSH residents that spoke volumes to the long-lasting
effects of the unique mix of education, mentorship and development that Stepping Stone House employs with each of its young
charges. 33% had gone on to become homeowners and 78% were employed. Others had also pursued higher education and found
stable renting opportunities.”

Stepping Stone House CEO, Jason Juretic, said of the award, ‘It’s wonderful to see the hard work of our team recognised in this way. In the end, it is all about our children and young people and helping them be the very best they can be. I was pleased to see our emphasis on measuring outcomes was recognised as part of the assessment process and it is key that we keep using empirical data to determine where our focus needs to be and what is working
effectively”

Moving forward, Stepping Stone House continues to be dedicated to ending youth homelessness and supporting children and youth to
become strong and independent. We believe we can and will deliver even more impactful change and inspire the community to band together
to do more for those that need it.

Experiencing the life of a sailor on the Young Endeavour

During my time on the Young Endeavour, I came to realise what it was like to be a sailor on a sail ship. From the sea sickness, I got when we entered the open ocean, to the experience of climbing a mast. My sea sickness was overcome by the third day.

The constant swaying of the ship made it hard to eat in the galley (which is the eating area) as you had to juggle your food around. The food was worth the effort, very good.

The beds were not hammocks but bunk beds with enough room to just hit your head, I got the bottom bunk.

Every day we were woken up by terrible music being blasted through the microphones on the ship.

Example: Sink the Bismarck as sung by Johnny Horton which seems questionable, seeing as we were just waking up that morning on a ship.

During the trip, we outsailed a thunderstorm in the middle of the night as we went further past

Brisbane. There were also six cargo ships which were massive compared to our ship and we had the experience of sailing between them with roughly 100 metres each side, which is not that far when you see something that big.

We also went to a place called Little Manly which is next to Manly beach. We went ashore and had an hour to ourselves. During this hour I was able to experience what it was like to be on flat ground after being on a ship. I believe from this experience I know where the term “Drunken Sailor” came from. The adults on the ship had a few fishing rods with them and caught tuna, small fish and a shark that was about a meter long.

We spotted a whale, tonnes of dolphins and a few fighter jets flying over the ship; it sounded just like from the movies.

One day we went to the Jervis Bay military base. We were allowed to explore the base which is an active Navy training site which was really cool. I also took the time to notice that it seemed its population was 1000 kangaroos to every 10 people. The kangaroos also do not flinch at the site of a flying golf ball heading towards them from the local golf course.

Finally, on ANZAC day we had the honour of doing an ANZAC service with serving Military personnel.

Though this was not at dawn but at 8 am due to us, the crew being exhausted. We also had the honour of our Captain using a salute cannon made of brass with the date of 1837. Not only this but it also rained, but no-one moved a muscle until the end of the service.

When I came off the ship at the end of the trip, it really felt like I done something amazing. Thank you for letting me experience a once in a lifetime opportunity, to be one of the lucky few to be on board the STS Young Endeavour.

At Stepping Stone House, we provide secure and safe accommodation for formerly homeless and disadvantaged children and young people. We also provide educational and developmental learning programs and pride ourselves on challenging our young people to be the best that they can be and fulfil their potential.

But there is another aspect of our organisation that isn’t quite so rigorous and demanding, yet equally important. And that is our strong belief that young people need to be given the chance to be themselves in an inclusive and non-judgemental environment.

That’s why, every year, for more than ten years, Stepping Stone House has been taking our children and young people on a Summer camp to give them some water-based experience and FUN.

At one point last year, we were close to cancelling the surf camp due to extensive rain and flooded campsites.

But two of our young people challenged us by explaining that they were ready for the camp no matter the weather. The kids had been taught to be resilient and to push through when things got a little tough. They were also quick to point out that they had never been on a family holiday, which demonstrates just how crucial these camps are. Needless to say, we headed out to Narrabeen Lake on the New South Wales coast and were the only people in the flooded campsite!

FUN as a developmental tool

We recently returned from our 2018 Summer Camp where our young people filled their schedule with camping, surf lessons, snorkelling, stand up paddle boarding and chilling out playing games. They also learned some life skills; cooking and cleaning for themselves and interacting with one another – all against a vibrant coastal backdrop. 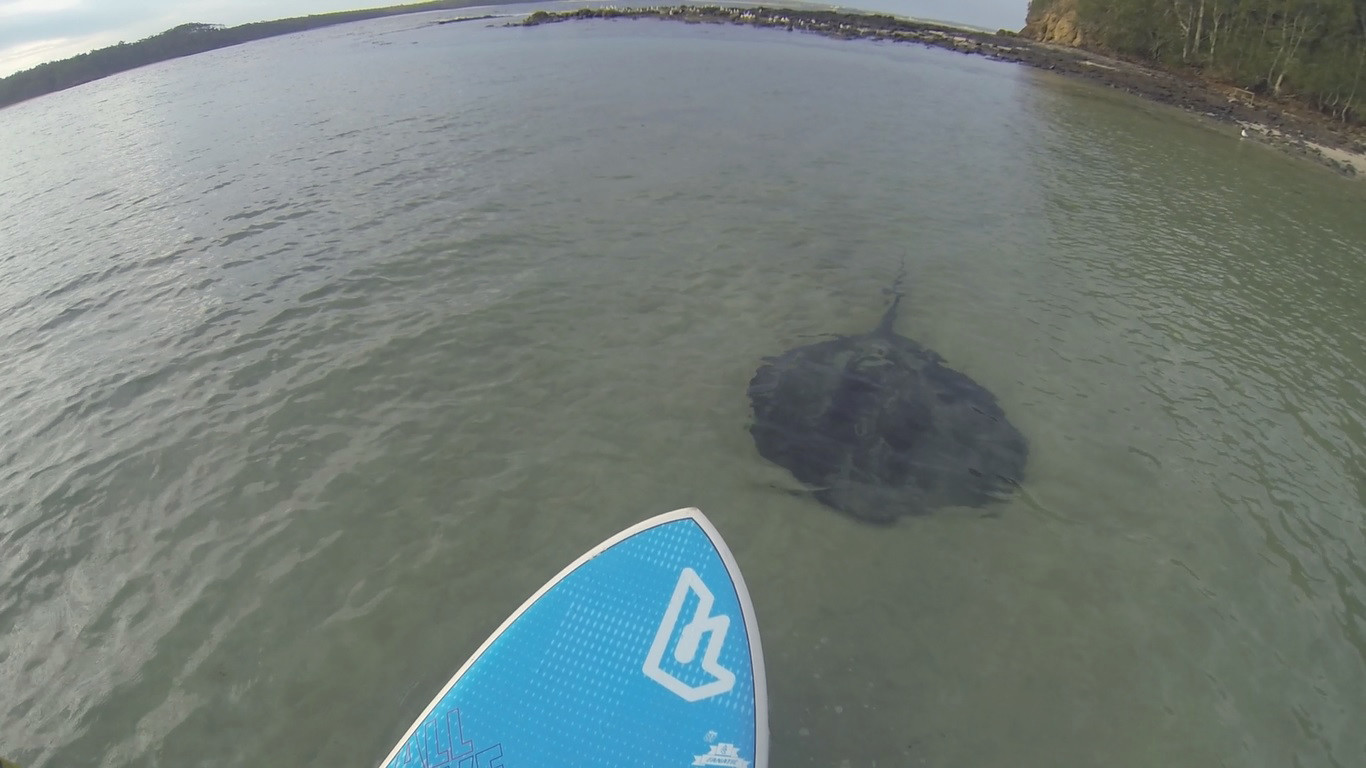 Learning through doing – and enjoying – is such a crucial part of growth and development and is an integral part of what we do at Stepping Stone House. This is not merely a theoretical concept – but one where the outcomes can be measured.

Thanks to the support of the Huber Social team, we have designed surveys and post-event reviews that evaluate our young people’s experiences and wellbeing. Through these, we have seen an improvement in their wellbeing by 43 per cent over the last 12 months. Together with therapeutic care, these camps and our adventure education programs significantly contribute to and reinforce that. These metrics are also important not just for staff to see their efforts reflected, but also for donors who want to see improvement first-hand.

These FUN-focused initiatives – while not following specified parameters – inevitably link back with educational and developmental goals and have a direct benefit on mental wellbeing.

Fortunately, we are able to mobilise an amazing team of businesses, philanthropists and donors to make these invaluable camps happen. The surf lessons and boards were donated to us by former world surfing champion, Pam Burridge, while the stand-up paddleboards were donated to us by generous members of the Sydney SUP community. Even the food was donated by OzHarvest, and Bakers Delight while the vehicles and fuel were donated by the Goodman Foundation. All of this enabled us to focus on booking the right location, setting up the program and just having FUN.

In the end, because there is no pressure to do or perform, the summer camp becomes a relaxing family holiday – and those are the words that our young people have used.

Family, fun, and the freedom to be yourself is vital to all individuals – especially the disadvantaged and those living away from home. Which is why these FUN camps will continue for many years to come.